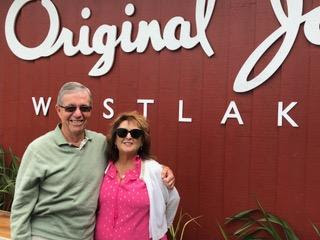 Dear Friends
Mary Woodside Smith passed gently in her sleep early the saturday morning December 8.  She is survived by her son, nieces, nephews and of course, wonderful friends.  Mary had been battling cancer for the last 3 years.
I received this sad information from Cinda, one of Mary's closest friends. As soon as Cinda has more information on services she will pass it on.  We will also have a mailing address then for anyone who wishes to send card.
Mary loved to attend the Westmoor reunions and was disappointed she missed the cruise and the BBQ.
Love to all,
Marian and Cinda
at December 09, 2018 No comments:

Dear classmates,
Since our 50th reunion, our class has had several get togethers for lunches,
dinners, cruises, and a fabulous party at Jerry Ball’s Santa Cruz home last month.
Now it is time to begin to focus on our 55th reunion next year. The dates are set: September
6th-8th. The place is the Airport Plaza Hotel in Reno, Nevada. For the mere price of $70.00
per person, there will be a no-host cocktail meet and greet Friday night, a sat night dinner with dancing
(if anyone can still dance, at our age), and a Sunday brunch before your departure. We have
blocked 50 rooms at favorable rates at the hotel for your convenience.
Official notifications will be sent out early next year, but save the date now so there be
no reason to miss our next great class reunion.
Enjoy the upcoming holiday season and look for the official notification early next year.
Ron Johnson
WHS Class of 64